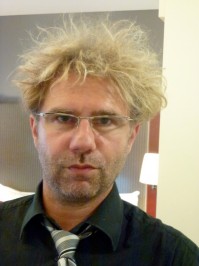 Born in Prague, a civil engineer by education, an events organiser by heritage and a party-creator and music-provider by heart, Pavel Šebek started his career within optics and optometry as an interpreter for the Association of Czech Opticians and Optometrists in the early nineties, only to soon become their foreign affairs manager and events and congress organiser.

He represented the Czech Association for the first time at the ECOO meeting in Bergen, Norway (1995) and while there realised* that the Eastern part of Europe was not participating in international optometry affairs. Therefore, on behalf of his national association, he organised from scratch seven congresses for Central and Eastern European opticians, optometrists, their professional associations and educational institutions.

These congresses created a joint platform for optics and optometry of the individual and then uncooperative countries of Central and Eastern Europe and subsequently brought them to become new members of ECOO. The congresses grew into three Twinning Universities Project for Optometry ‘TUPO’ congresses organised in Brno, Czech Rep. in cooperation with ECOO, financially supported by CIBA Vision, which were then absorbed by European Academy of Optometry and Optics.

In the meantime, Pavel became the secretary of the ECOO Education Committee chaired by Prof. Roger Crelier and Prof. Roger Anderson, respectively. After a short break and apart from his work for the Czech Association, he became active within ECOO again as secretary of Professional Services Committee, chaired at present by Dr. Peter Gumpelmayer.

Pavel’s contribution to the international optics and optometry might not be directly through the academic knowledge of the professional matters, but rather through his knowledge of many other fields and aspects of life and its happenings.

* Within Pavel’s optics and optometry career it is necessary to mention Mr. Beno Blachut, the current president of the Association of Czech Opticians and Optometrists who, with his association, has been supporting Pavel’s international activities down the years and stood behind him even at outset of many of the events, such as the Congresses for Central and Eastern Europe etc.