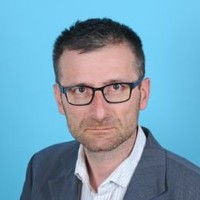 Matjaž studied Optometry in Munich / Germany in 2001 – 2003. Simultaneously, he completed the certification for Master in Eye – optics at the Handicraft Chamber in Ljubljana. In 2008, he completed the Master-programme in Aalen / Germany, organized by the American universities New England College of Optometry and Pacific University College of Optometry. During the studies, he attended summer programmes at these two colleges in Boston and Forest Grove / Oregon and at adjacent clinics. In 2010 – 2015 he did an interdisciplinary PhD at the Faculty of Arts in Ljubljana, at the Experimental Psychology programme in the subject Visual Stress and Cognition. During this period, he completed the external subject at the University Eye Clinic in Tübingen. Among others, he made his proficiencies in Freiburg University eye clinic and at Miller Institute in Innsbruck.

Matjaž is author of several innovations in the optical field. From 2008 to 2020, he was regular lecturer at University of Velika Gorica at the Optometry programme and works in a private practices »Optika Mesec« in Bled and in Jesenice / Slovenia. His interest fields are prescription of special contact lenses, binocular vision correction and the problems of visual near point – stress and myopia growth. Since 2006, he is the president of Optical Association of Slovenia, organizing conferences, seminars and workshops in optical and optometry topics yearly. He is founding member of European Academy of Optometry and Optics. Every year, he visits several professional or scientific conferences in Europe or in the USA. In the years 2004 – 2019 he held over 80 Presentations and workshops at national and international level and has published several papers.

Besides, he is former professional windsurfer, also doing kitesurfing, snowboarding, jogging and cross-country skiing. Matjaž has a family; his wife Vida is a singer and an optician; they have four sons.